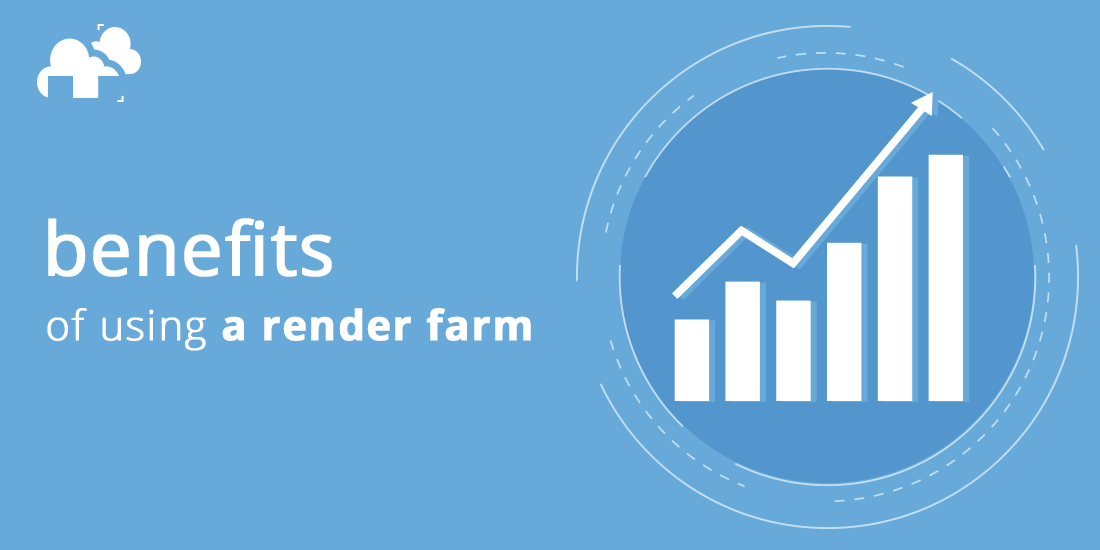 The Benefits of Using a Render Farm

The Benefits of Using a Render Farm

What is a render farm?

Down to its bare bones, a render farm is “a group of networked computers devoted to rendering images, used typically in the production of computer-animated films”. In the following text we will be assuming at least a basic knowledge of what rendering is and what it’s used for, however, if you are looking to learn more about what a render farm and rendering itself is, you can visit the following post once you’re done here.

Rendering is that necessary time-consuming headache that one has to deal with at the end of the main pipeline if they want their hard work to look great. The problem with rendering is every little thing that is going to be visible in some form within the finalized image or render sequence – be it geometry, textures, lighting or shadows – adds precious milliseconds, seconds, minutes or hours to the rendering of even a single frame, depending on its complexity.

Reducing the headache rendering brings is where render farms come in; they are absolutely invaluable in the 3D animation industry, especially when trying to produce computer generated imagery that looks like it could exist within our world.

Now a few extra minutes might not seem that dramatic, but when you consider that, at the very least, modern film and TV footage runs at 24 frames per second, this can add up to pretty brutal render times. Of course part of this depends on the capabilities of your computer(s), renderer, or company as a whole; however if you want something that looks like candy for the eyes, you’re going to have to deal with extended render times, and time very often means money. Reducing the headache rendering brings is where render farms come in; they are absolutely invaluable in the 3D animation industry, especially when trying to produce computer generated imagery that looks like it could exist within our world.

On very large scale productions such as the likes of modern Disney movies, the sheer scale of the render farms they use can be absolutely mind boggling. Engadget states that in the case of Big Hero 6 (2014), Disney built a global illumination simulator known as Hyperion from the ground up. The Hyperion renderer is responsible for the all-important environmental effects; a feat requiring the use of a fifty-five thousand-core render farm spread across four geographic locations! Blooming ‘eck.

According to Disney’s CTO Andy Hendrickson, Hyperion is so powerful it could render 2010’s Tangled from scratch every 10 days; that’s an incredible amount of power, especially considering Tangled was only released 4 years prior to Big Hero 6. Thankfully, Disney themselves have provided a page dedicated solely to this mind-blowing renderer. Of course, you don’t need to be a multi-billion dollar company to know the impact of lighting on render time, after all a beginner modeller or animator soon finds out the huge difference even somewhat advanced lighting can make, especially when you’re trying to achieve smooth shadows and a well-lit scene.

You don’t need to be a multi-billion dollar company to know the impact of lighting on render time, after all a beginner modeller or animator soon finds out the huge difference even somewhat advanced lighting can make.

The visual beauty of Moana, thanks to Hyperion

Roll on just under 2 years to the recent release of Disney’s wonderful and at times tear-jerking Moana (2016), and the sheer power of the undoubtedly even more technologically refined Hyperion renderer is clearly visible in the film’s spectacular lighting enshrining the island landscapes, its obligatory sunset, and of course the glistening CGI water one just can’t help but want to dive into.

On second thoughts, we don’t recommend actually trying to jump into Moana’s water like Tai reaching into his computer screen in Digimon: The Movie (2000); of course, that is unless you’re lucky enough to have a paddling pool filled to the brim with glitter-laced water in your living room.

Okay, render farms are awesome, but why should I use one?

Planning for a render farm

It’s best to plan from the very beginning if you’re going to need a render farm, or whether you have enough time to spare to dedicate to rendering, this way you can budget around it. If you are producing the work for a client, make them aware of this and work it into your payment plan, and if they’re not willing or able to up the compensation then if you feel it necessary see if you can gain more time. If neither of these things is possible you will have to take a more tactical approach toward the project, from the number of concept iterations, the level of detail within the scene including polycount and texture complexity, to the overall lighting quality and required amount of illumination.

What about costs & why should I render with GarageFarm.NET?

Like most things, render farms are not free, and for good reason! You can imagine the electricity bill we rack up thanks to the 20,800 CUDA core graphics cards and 3,600 CPU cores we have running 24/7 for your render satisfaction. Having said that we do provide you with the ability to perform test renders with us before jumping in at the deep end. You can even estimate the full price of your render(s) based upon your computer specs, average render time-per-frame, and the level of priority you need your project rendered with. Depending on the size of your project you may even be lucky enough to render the whole thing for free, thanks to our $25 free render credits on registration.

In the spirit of goodwill, we’ll render your entire project for free if it’s for a secular charity. It doesn’t matter where in the world you’re based for you to take advantage of our cloud-based render farm either, and we’re always on hand to aid you if you’re experiencing difficulty. Paying for the use of a render farm is paying for time, and time is a precious commodity, especially for businesses with set-in-stone deadlines, and students studying 3D animation and CGI who are working toward their own strict university deadlines; myself included, prior to my graduation in mid-2016. In fact the independent review that helped lead to me writing posts for GarageFarm.NET can be found here.

“Paying for the use of a render farm is paying for time, and time is a precious commodity”If you’re still uncertain, to help you decide here’s our showreel of footage from some of the awesome projects rendered with us in the first half of 2016. Enjoy!