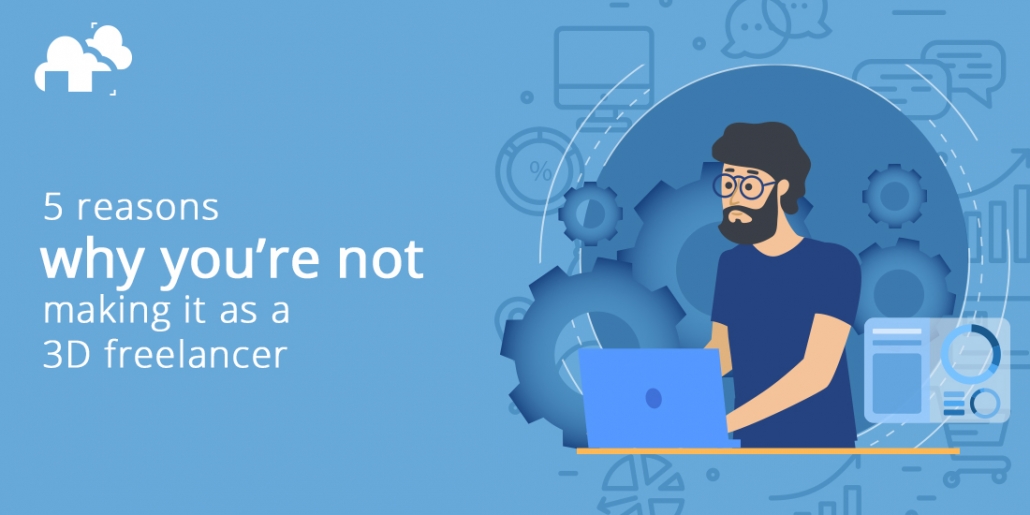 Here's why you're not making it as a 3D freelancer

Here's why you're not making it as a 3D freelancer

Freelancing as a 3d artist is not for the faint of heart, that almost goes without saying. Rather than being stuck in an office all day doing things that have nothing at all to do with our passion, freelance gives us that gleaming opportunity. Once you get a taste of the relative freedom freelance brings it’s hard to go back to being told what to do by the same employer day in day out. However, this is a trade that will not hesitate to eat you alive if you’re not careful. No doubt quite a few who have taken this path have soon had to return to the normal world of work just to feed themselves, because for whatever reason this freelancing thing just wasn’t working out. Well, we’re here to help stop you becoming one of them.

Say you want to be a freelance animator, but can’t bear the thought of your hard work being rejected. Fear of failure is one of if not the most destructive force for the productivity of a freelancer. It is irony in its purest form. When this fear engulfs you, it becomes so powerful that failure becomes almost inevitable, not because your work isn’t good enough, but because you’re too scared to try. The problem is, without failure there is no success.

At its worst, an intense fear of failure (like fear in general) can have serious psychological and physiological effects; within your head failure becomes this shadowy beast that is never too far behind, just waiting for its chance to swallow you whole. The thing is, only a machine can succeed at its designated task near 100% of the time, but you are not a machine. You are human, and just like the rest of us you’re going to fail a lot over time, but there is a silver lining; these failures usually come complete with a lesson and always come with gained experience. Take comfort, for this stalking creature of your own creation—this cerebral hound of the Baskervilles—can be overcome.

2. You haven’t found your niche

To find your niche, first you should establish why you’ve chosen the path of a freelancer in the first place. Knowing this will make it easier to find a niche that suits you. Assess what you’re passionate about, identify your particular skill set, and find an industry you’ll enjoy working in. There is no set timescale defining how long this might take; it might take months, or even take years to find your place. If you want to do something you have some but not all of the skills for, learn them; just remember, there will always be more to learn – embrace it.

It took me 5 years to find my niche. Time spent studying 3d animation and creating cg content, with hopes of becoming a freelance 3d artist. It wasn’t until after I graduated with a respectable 2:1 I realised doing animation wasn’t for me. A grade that would doubtless not have existed if not for a seemingly natural skill for exploratory writing and research. Opportunity struck when my candid 2000+ word response as part of an Artist Spotlight piqued the interest of GarageFarm.NET I’ve been freelance writing the occasional blog post or case study for them ever since. Of course, there is still a lot to learn, and you know you’ve found your niche when you look forward to doing just that. Good news is Entrepreneur has gone ahead and boiled the process of finding your niche down into their own 5 step guide.

If you’re just starting out it’s understandable that you may ambitiously want to jump to doing big projects, either for the challenge or because you think you know how to achieve that goal. The problem is, in all likelihood, you don’t. Well, not quite. It’s easy to look at an object or a design and assume how you’re going to achieve it, but knowing the right tools and methods to achieve that dream is a whole other story. For example, back in my first year of uni I was sat in our Autodesk Maya class as one of very few who’d had previous experience with the program, having spent two years with it in college. So while my peers were being taught the very basics of Maya 3d modelling, I decided to have a go at modelling a human head. At the time I knew nothing about facial topology, or the rings of muscle that allow our brows to shape, eyes to blink and the mouth to deform. You can guess how that went.

If you’re lucky enough to get commissioned for a big project but don’t have the knowledge base, you’re going to have difficulty hitting that deadline and satisfying your client. Eventually you’ll get overwhelmed, and it’s at that moment by sheer coincidence your client is going to ask for what to them seems like a couple small edits; after all it’s your job to know, not theirs. Next thing you know the deadline has arrived, and what you have to show for it is something that is not up to the standard that neither you or the client expected from you – if you make it to the deadline at all.

Without starting with smaller projects and building up from there you have a very unsteady foundation that will either cause you great stress and anxiety, or eventually collapse entirely. For example, if you want to make a career out of freelance 3d modelling first you need to get to know your toolset, and the ‘rules’ of what to/not to do. In fact, I wrote an intro to 3d modelling in Maya back in late 2016, complete with tips, tricks and tools still relevant today.

4. Hoping the work will come to you

The inherently unstable nature of freelancing requires a steady flow of clients. You could be a social media master when it comes to displaying your work online, a prolific hashtagger, but while it indeed gives you more exposure to potential clients, there are no guarantees. It is all too easy for someone to see it, 👍 or ❤️ it and move on (guilty as charged). It’s alright screaming into the void through visuals alone, but it’s the talkers who get the attention.

Networking is vital—be more than just pretty pictures, be a voice. And say you successfully complete a client project, networking doesn’t have to end with it. You have the valuable opportunity to use this moment to ask for referrals. As filmmaker Brandon Smith put it way back in the ‘apocalyptic’ year that was 2012, “The bottom line: Be authentic and true to your values and you’ll quickly become a valuable member of the Twitter community”. I believe this applies not just to Twitter but to seeking out and communicating with potential clients too, some of whom may even become friends.

Working smart doesn’t mean squeezing on a tuxedo every time you work (thankfully). What we mean is taking advantage of software, assets and services that help speed up your workflow. To paraphrase GarageFarm.NET – surviving in the fiercely competitive 3d realm requires the ability to work efficiently, such as via the use of pre-made models/assets, addons, scripts to automate tedious processes, or a batch processing macro. And of course, saving yourself a lot of pain and panic by using a render farm. You may be happy to know 10 Tips For A Faster Archviz Workflow & Better Renders goes into more depth on working efficiently & effectively, complete with advice applicable not only to archviz but to 3d freelance work in general.

The aim hasn’t been to tell you off, but to help you identify what may have been holding you back. It’s all too easy to go on for years doing things our own special way because that’s what makes us comfortable, yet only to find the effort far outweighs the payoff (guilty, again). Going from writing long-form case studies with negligible viewership to this 5-point listicle was my own turning point in the journey of the freelancer. There’s one way of working smart that I didn’t go into above that should go without saying for any freelance 3d animator, and that’s using a render farm. With the help and support of a farm for 3d rendering, freelance becomes a lot less fraught with progress destroying obstacles. The time saved makes the small cost worthwhile. To merely summarize the various benefits of using one required an entire post, perhaps one of the most important being that it is surprisingly cost effective. With that we wish you all the best with your future endeavours in the world of freelancing; and in honour of the great man that was Stan Lee, EXCELSIOR!