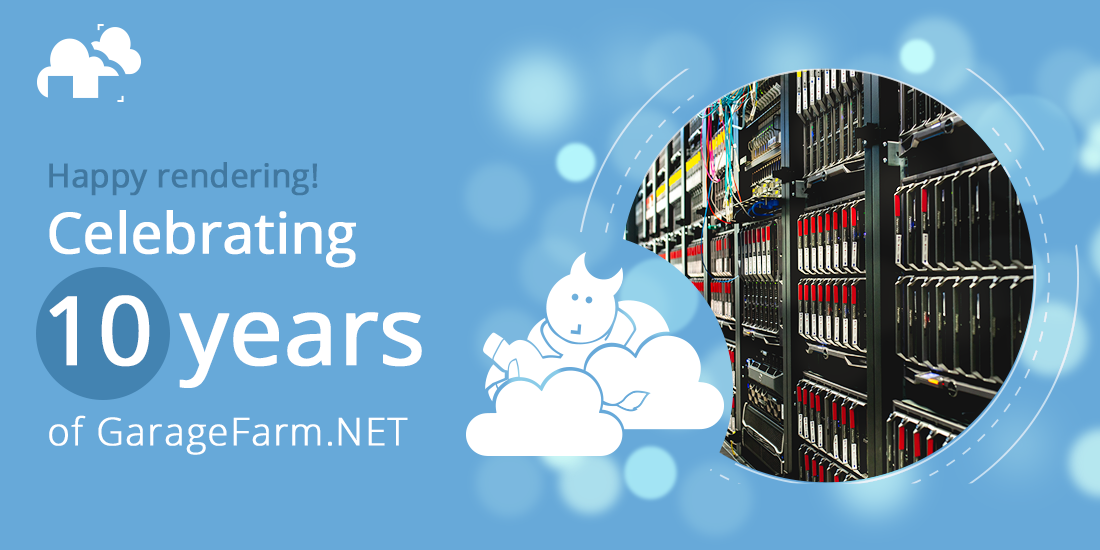 Rendering was always a nightmare

We’re all quite familiar with the bones of the story by now. A rendering service built from the ground up by partners Tomek and Minhee, the farm’s beginnings had the makings of a pipe dream. Under the saturated noise of cooling fans, replete with a clunky assortment of desktops with electric bills scattered about the floor, as well as what we imagine to be liberal amounts of duct tape, tenuously clustered in a humble garage was a company of two. At the time, the CG community was just a little more than a small series of underground online forums, but the 3D artists’ concerns resounded as they always have: “Rendering is a f#*&ing nightmare.”

So, when the company Tomek had worked for as a 3D artist had closed, he and Minhee pooled their savings to make something of their own. This was the year 2010. To paint a picture of what was going on in the public eye at the time, the year’s top-grossing animated films capped the end of beloved franchises and the start of new ones, and in CG that set a lasting benchmark for quality: Toy Story 3 and Shrek Forever After, for example, to be followed with Tangled and How to Train Your Dragon. The videogames that came out for my PS3 console (now defunct) boasted of “next-generation graphics,” headlining realistic character models that, in hindsight, look terribly a lot like sacks of potatoes. As a consumer, I loved those potatoes. The 3D leap was palpable everywhere, even to teenage me: the air chimed with technological possibility.

But the actual reality of it must have hit like a truck, as it probably did for Tomek and Minhee. There was a reason rendering was used by so few in entertainment. Budgets for 3D-related ventures were big. They had to be. And the rendering scene? Hardly there at all. “We actually started late,” says Tomek, “There were already other render companies when we were starting. Many that started up later than us without big investors just disappeared.”

According to Michał, GarageFarm.NET’s current General Manager, “Ten years ago, 3D graphics was based on autodidacts (i.e., people who were self-taught) and enthusiasts rather than trained professional graphic designers. Keep in mind, for example, that YouTube came out in 2005, so there was no easy access to specialized knowledge. The expectations toward rendering farms and their output were also hugely different; awareness of such farms was minimal, too.”

Michał joined in 2013. The farm had migrated from the UK to an office in Korea to cut electrical and internet costs just the year before. Minhee was mainly on customer support for her native fluency, while Tomek handled the goings-on behind the scenes. The clutter of desktops graduated to 48 render nodes. The rented space, also Tomek and Minhee’s home, had two air conditioners bought secondhand from a local restaurant. While the service had already been based on their CRM and queue management systems, the simplest tasks had to be done manually.

“The most significant difference then was technology. We weren’t too many, either. Although with the technology and brainpower we have today, we improve by the month, lately, by the week even,” Tomek added in, “But we fought with the elements often in the beginning. I remember one night, we had to set everything up for a job and fell asleep at 2:00 AM. We woke up at 6:30 to realize that the queueing software canceled the render at 4:00, and for no reason.”

It was an environment that needed people to pick up new skills and address new issues at the drop of a hat. Michał was no programmer, but before the farm got an automated payment handling system, the finances were done through Google Spreadsheet and JavaScript — based on a code he wrote from scratch in three days. There’s a saying in Poland, Michał tells me, “the human thing is to make mistakes, the thing of fools is to persist with the same ones.”

By the time the farm hit 200 servers, they had rented another office to accommodate them, but they couldn’t afford to separate the workforce just yet. According to Michał, it would get so hot that the staff would be working in their underwear. That ungodly sight was what Lucas, now the company’s present Director of Operations, entered into. First hired for a one-off translation job from Korean to Polish and vice versa, Lucas arrived right on time for an open slot in marketing and took it. The flurry of managerial positions he found himself in over the years (business operations, customer support, marketing, et cetera) wasn’t out of a lack of people. By then, they had a dedicated team of wranglers and developers. It was a marker of business growth. Lucas:

"And I had to grow with it. Every time we doubled our revenue or so, I would take on different responsibilities to accommodate the changes and sustain what we had. The early days were particularly tough for us; we were a small business that needed both hardware and software, making ends meet without support from investors. In a way, I do miss the old days when I was the one who had to get his hands dirty. I don’t miss the financial hardship, though, and I don’t think I’ll ever forget it."

But more doesn’t mean better, not immediately. As the machine got ever more complex, with more and more variables jumping into the fray, it also meant more things falling apart. They bought everything themselves; it wasn’t until 2016 that GarageFarm.NET received external funding. They couldn’t afford to zoom over speed bumps, even if, at times, that was exactly what the 3D industry demanded. Each year, until now, is a breakout year for technology, and it develops at a breakneck pace that, under the present economic model, makes it difficult for modest, independent businesses to stay abreast, if not keep afloat.

When the server count had hit the 250-300 range, the company moved back to Europe and set up a data center in Torun, Poland, with dedicated server rooms to keep them cool and running, and offices kept separate for people to keep their clothes on. Looking back, Michał let me know:

“We always wanted to be independent. And we succeeded, not only did we get a headquarters, but we now also have the most modern server room containers in the world. We have control over the entire rendering process, too. We’re fully automated, with our own software and a team that can adapt, when necessary, to client needs.”

By year five, 2015, the infrastructure was finally in check and has been modeled to be as flexible as need be. More people have come in since then; brilliant people, too, who have brought a lot of expertise to the table. The pipe dream that started in a garage in 2010 now has a customer service team ten people strong, with whole departments for Human Resources, Information Technology, and Marketing.

Looking forward to another decade, GarageFarm.NET is poised to take its next steps as it continues to expand and diversify its offerings. According to Lucas, “In 10 years we might have even more products to offer. We want to be part of an artist’s toolbox one way or another. We want to help artists become more independent, sophisticated, and technologically superior without spending thousands of dollars on tools and training.”

Two years ago, when GPU tech and rendering made the splash into the market, the farm launched its GPU rental service, Xesktop. Presently, they have a talented team of modelers creating for 3DBee.IT, the company’s upcoming asset store. “With the introduction of real-time render engines comes the inevitable risk that render farms such as ours won’t be quite as needed. It will take time, though, and expanding our product line ensures we stay relevant, and it helps us sustain growth despite the changing industry.”

In the unlikely event that industry trends finally come close to overtaking GarageFarm.NET, you can bet there aren’t many other companies who would be as prepared. The best part of this story was what Tomek and the gang realized early on, the one I had until now left out.

You guessed it: The human touch. If it were solely up to how cutting-edge the technology was from the onset, no way would there be enough 3D enthusiasts, freelancers, and geeks to go around, nor would there be affordable rendering services to accommodate them.

Because if there’s one thing the people in GarageFarm.NET know and know comprehensively, it’s the hassles of rendering. It’s what GarageFarm.NET was born in, after all!

So, as long as it’s someone from here, if they say they’re here to help and that they care, you can bet your bottom dollar they mean it.

As they say, Happy Rendering!