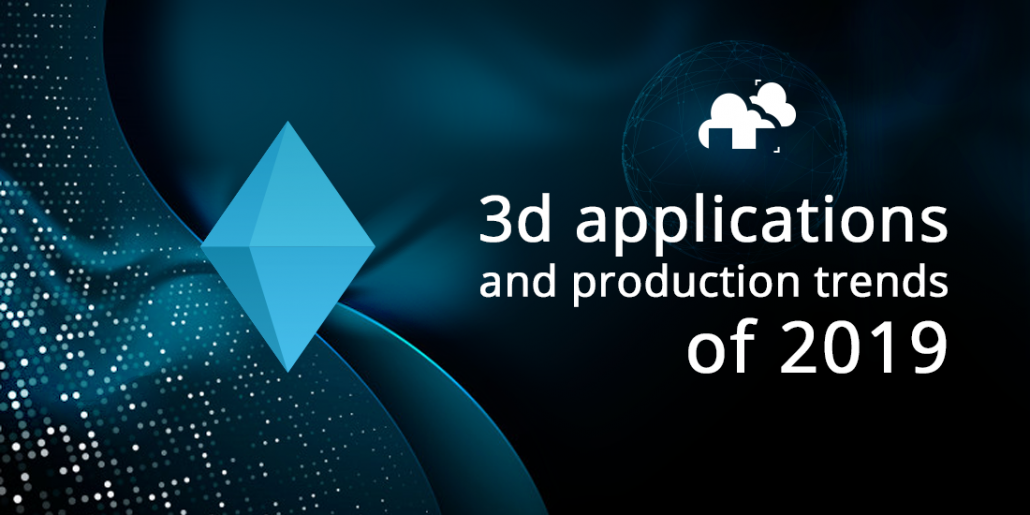 3d applications and production trends of 2019

3d applications and production trends of 2019

A while back we published an article called The Future of 3d Modeling, where we had a look at the present and future applications of 3d visualization and design among different industries. Now that we’re well into 2019, we thought it would be interesting to revisit this subject and see what roles 3d trends play in the digital enterprises of today.

The technology behind 3d production in general gets better every year. More often than not each of the leading 3d suites ship with incredible new features with every release. New solutions mean better quality, and as better quality becomes standard quality, the organization behind your favorite 3d program works to provide even better solutions for the next version, and the cycle goes on.

At the same time, avenues for 3d in new fields are beginning to present themselves, sometimes in very interesting places!

Here are a few interesting developments for some applications of 3d that we’ve come across at the time of writing.

We’ve reached some unprecedented levels of sophistication in 3d rendering. Disney’s The Junglebook, for example, is the first movie ever to showcase that many CG animals in astonishing realism, and their remake of The Lion King is just up ahead.

Meanwhile, 3d animation is gaining wider appreciation thanks to online streaming releases like Netflix’s Love Death + Robots, and Tangent Animation’s Nextgen. Thanks to platforms like Netflix, animation is much more accessible to the general crowd than before. Sony’s SpiderMan: into the Spiderverse was an animated blockbuster featuring a bold, visual style we wouldn’t have thought would hit the big screen. Where in the past achieving an appealing character design in 3d was a very thin line between awkward and unsettling, now we have reached the promised land beyond the uncanny valley.

NVIDIA also released its Optix AI Accelerated Denoiser, which uses Artificial Intelligence to eliminate noise from 3d renders, allowing 3d designers to get away with rendering at a lower quality in favor of speed. The Optix denoiser is trained by thousands of images that allow it to anticipate different scenarios in which noise results in an image, and work based on that information. Popular render engine services are already beginning to implement the denoiser in their software.

Reconstruction software is on the rise. The demand for 3d scans has found its way to Medicine, Archaeology and History Preservation initiatives, and with the release of Meshroom, an open source reconstruction program, anyone can now produce 3d objects created from photographs.

History Preservation is an interesting use of 3d scanning that is becoming more apparent. Several Museums have begun to scan their collection and offer some to the public for 3d printing. Scan the world is a non-profit initiative that have taken it upon themselves to archive historical items from museums all over the world. Imagine having a scan of your favorite sculpture from your trip to the Louvre, and then piping it through an online 3d printing application for your very own physical replica!

As suggested above, 3d printing is now fully within the reach of the general populace, and is well past being a novelty people would mostly only speculate on. In the past few years, we’ve seen prints of prosthetic replacements, houses, food, firearms, cosplay props, custom miniatures for tabletop games and even musical instruments!

It’s also possible to go on a 3d printing frenzy with a clear conscience now, thanks to the invention of biodegradable filament.

Virtual reality is now a household name, and you can find VR headsets like those from the Oculus line almost anywhere. VR Apps now cater to needs way beyond gaming and entertainment, adding the digital immersive experience to apps to help with meditation, medicine and even for 3d modeling! Side effects such as dissociation from “objective” reality is becoming more widely reported among VR users as a result of the technology making it easier to spend more time in virtual reality. However, experts have suggested that these effects are normal, however, and disappear over time.

Augmented reality has also made its way into public use with apps like Pokemon Go, which became widely popular among children and young adults worldwide just a few years ago. Eyepieces like Microsoft’s HoloLens allows users to interact with media overlaid on what they are seeing in the physical world. The Microsoft HoloLens is on its second iteration, and promises innovative solutions for various sectors of industry.

Realtime rendering is today’s buzzword for 3d artists from all fields. The Blender Foundations development of EEVEE, the first open source real time engine integrated into a 3d suite has brought a dramatic increase in interest for Blender. Other big names in 3d software have also begun integrating real time rendering into their packages, such as Autodesk Maya’s viewport 3.0. The level of realism that can be achieved now almost negates the need for ray tracing in fields that work primarily with hard surface visualization; Architects, Industrial designers, prop concept artists all stand to gain from incorporating real time rendering into their workflows.

3d production itself is slowly becoming a less specialized field, thanks to tools and services that generate or provide assets without the need for users to manually 3d model them. Adobe’s Fuse CC is in the beta stage at the time of this writing, and aims to allow designers with limited experience in 3d generate characters and integrate them into their work in Photoshop, After Effects, and other products. Adobe Dimension brings sophisticated product visualization into the hands of practically anyone with some design sense, with an interface that is exponentially more intuitive than 3d designers are accustomed to. Andrew Price’s talk on 2018’s Blender Conference sheds some light on what artificial intelligence can do to automate many of the tasks 3d artists, or digital artists in general may benefit from delegating to a machine. Meanwhile, software like Da Vinci Resolve, which is available for free, is a complete editing and compositing suite capable of importing 3d objects into its compositor. With 3d already widely recognized by the general public and the media industry, it wouldn’t be too absurd for 3d production to be a skillset as widely adopted as photo editing is today.

What this means for 3d designers and artists

The role 3d technology plays in the modern world continues to grow, and at an increasingly fast rate, we are beginning to see this technology in our everyday lives. In a few years, it’s likely that we will start to experience more 3d generated content in anything from our social media feeds to 3d printed objects from scans or models of our own making. Operating 3d software will eventually have as shallow a learning curve as bashing some images together on Photoshop, and it may even become possible to do some 3d modeling directly on your browser instead of on a dedicated program. This all might make us 3d freelancers a little uneasy, but by adapting to these new technological developments quickly, this might be just what we need to elevate the quality and speed of work, and leave us with more time to focus on aspects of creating that are more enjoyable, and dependent on our unique interpretation of universal design and storytelling principles.

We are in the midst of immense change as 3d users, and there’s no real telling where we might end up 5 years from now, but there’s plenty to be excited about!